Traditionally, in the food industry, cleaning and disinfection is done using detergent and liquid water. Bacteria on the surfaces form biofilms that adhere to the surfaces very strongly [Reference 1]. Studies have shown that these biofilms are not easy to remove using detergent solutions because they are sticky. Bacteria are easier to remove in liquid solutions as compared to the surface of solids such as stainless steel. Bio-films tend to resist removal by mechanical and chemical means.  Other methods of disinfection needs to be explored to replace the mechanical scribing and chemical methods. Figure 1 shows a stainless steel surface that has been infected by bacteria. 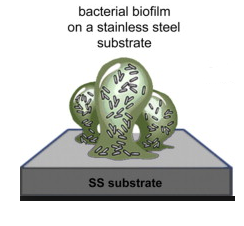 Laser cleaning of surfaces infected with bacteria is a very effective method because one can utilize the thermal effects produced by the laser to disinfect the surface. Figure 2 shows laser cleaning of a contaminated tray. 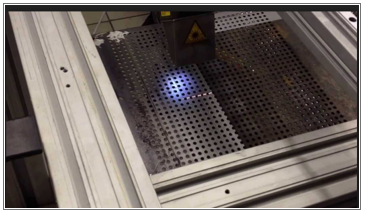 Studies have been performed to understand the effectiveness of using different types of lasers in cleaning bacteria infected surfaces. Usually the lasers to be used are pulsed lasers but the choice of wavelength, pulse energy and repetition rate is quite important. In one study [Reference 2], seven different types of lasers ranging from Ultraviolet (355 nm) to far IR ( 118 μm) were used to find their effectiveness in killing Escherichia-Coli (E-Coli) bacteria. Among the lasers,  a CO2 pulsed laser at 10.6 μm and several Nd:YAG lasers operating at nominal, second harmonic and third harmonic wavelengths were used.

The study showed that the CO2 pulsed laser was the most effective in removing the bacteria followed by the Nd:YAG laser above a certain energy density. The effect of UV on killing bacteria is quite well known and the third effective laser was the frequency tripled Nd: YAG laser(355 nm emission). For testing purposes, the E-Coli bacteria was planted on several plates and then the plates were exposed to laser irradiation. After this exposure, the plates were incubated for 24 hours at 37°. If sterilization with laser worked, after growth an area free of bacteria would be observed. Table 1 shows the different parameters of lasers and the observed area free of bacteria after exposure to such lasers.

As can be seen from the above table, energy density of the Lumonics Nd:YAG laser (10 msec pulses with 10 Joules of energy at 20 Hz) was 246 times that of the CO2 laser and the exposure time was 533 times longer as well. This difference could be attributed to the fact that water absorbs the mid-IR radiation (at 10.6 μm)  much stronger than the near IR (1.06 μm) and since the E-Coli bacteria reside in water, they get killed more easily.

The UV wavelengths at 355 nm also responded well to sterilization as shown in the table. The frequency tripled lasers operated at 10 Hz repetition rate and had a pulse duration of about 5 nsec. Comparing the Surlite frequency tripled laser with the Lumonics Nd:YAG laser, one can see that with a mean power 200 time smaller and an exposure time of nearly 5 time shorter (Energy density was almost 20 times less), the Surlite laser achieved the same order of magnitude cleaning area as compared to Nd: YAG (0.123 cm2 as compared to 0.715 cm2).

Allied Scientific Pro has developed a fiber based laser cleaning system that has already been used and proved itself working in many different fields such as ruch removal in aviation industry, cleaning historical monuments and decontamination of a nuclear facility. These laser cleaning systems have a laser head, optics and galvo mirrors that can make different shaped beams. Normally, a linear beam is used but to extend the application of these laser cleaning systems to cleaning surfaces infected with bacteria, and to increase the energy density of the beam, a circular spot size can be generated. As far as the repetition rate and mean power are concerned, the specifications are compatible with the parameters of Nd:YAG laser from Lumonics, mentioned in table 1. Cleaning operations of contaminated metal surfaces in the food industry could hugely benefit from laser cleaning system such as above. It is much faster and more effective than traditional methods of using mechanical and chemical means.