What is the difference?

Those who deal with spectroscopy and light measuring equipment sometimes wonder what are the differences between a spectrometer, a spectroradiometer, a spectrometer and a photometer. Understanding the differences are important for a particular application so that  funds are not wasted on a wrong equipment which cannot do the job. In this tech-note the differences are explained and examples of each category are given. However as a starting point, it should be mentioned that any equipment that has a “spectro” included in its name will measure a parameter as a function of wavelength. Whether it is the light intensity or the reflectance or the absorption, its value is provided at each wavelength in a certain range. Therefore an instrument such as photometer only measures a total quantity of something and cannot measure individual values at each wavelength.

Here are the description for each instrument:

A spectrometer would measure relative intensity of light as a function of wavelength.  A diffraction grating normally in the reflection geometry is used to disperse the light onto a CCD camera. Each pixel will receive a small bandwidth of the incoming radiation. Figure 1 shows the geometry: 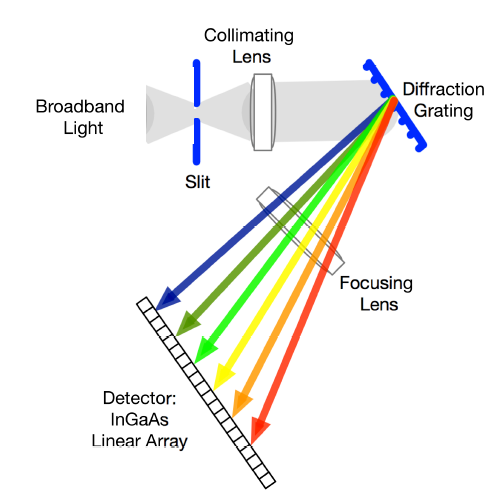 Figure 1: A spectrometer with a diffraction grating and a CCD camera

New types of spectrometers have emerged in recent years by the introduction of Digital Light Processing (DLP) technology. An array of micro-mirrors are used one at a time to reflect a small portion of the spectrum onto a single element detector and the full spectrum is constructed section by section. Figure 2 shows this arrangement. 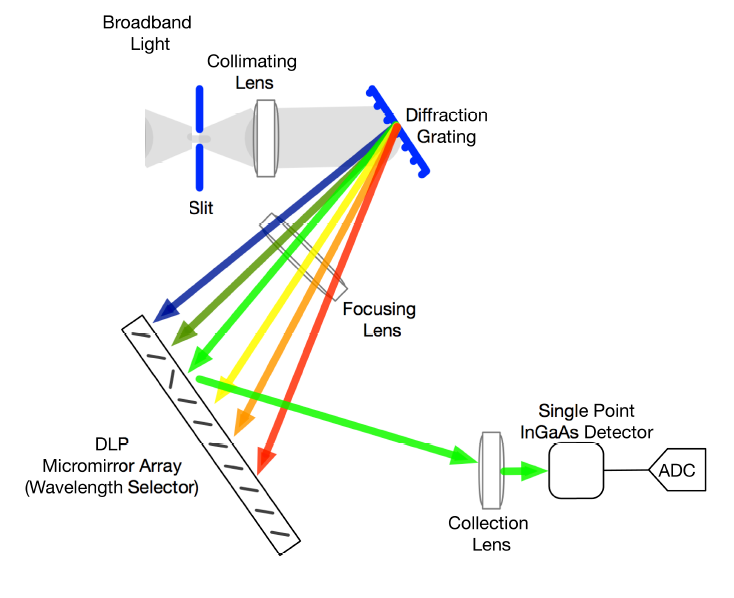 Figure 2: A spectrometer with DLP technology

One main advantage of the usage of DLP technology over array detector is that the cost of a single element detector, specially, in the NIR region is much lower than a InGaAs detector array which could be quite expensive [Reference 1, Reference 2]. The DLP mirror does not significantly add to the price of the instrument. Aside from the cost, the detector area for DLP could be larger (few mm instead of tens of microns) which improves the Signal to Noise Ratio (SNR) and scan errors due to defective pixels and pixel to pixel non-uniformity are reduced because only a single element detector is used[Reference 2].

A spectroradiometer is a spectrometer with light intensity calibration. So the measured light at each wavelength will have a unit associated with it. This unit could be radiometric such as Watts/m2 or photometric such as Lux depending on the application or quantum such as μmol/m^2/sec (to measure Photosynthetic Flux Density). The lighting passport offered by the company Allied Scientific Pro is an example of a spectroradiometer calibrated in photometric units. Please see www.lightingpassport.com for more information.

In figure 3, two results from the measurements of lighting passport are shown. The left picture shows the relative intensity , the table on the right shows the total illuminance in lux or foot-candle. 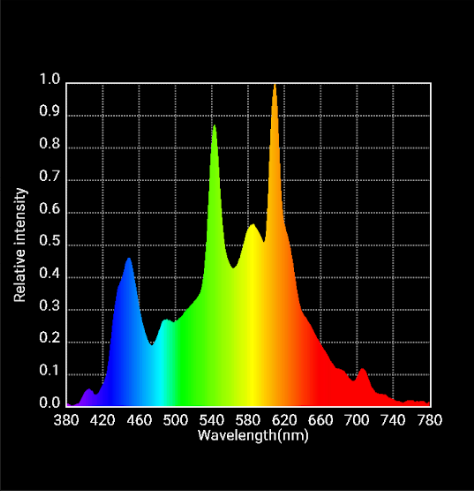 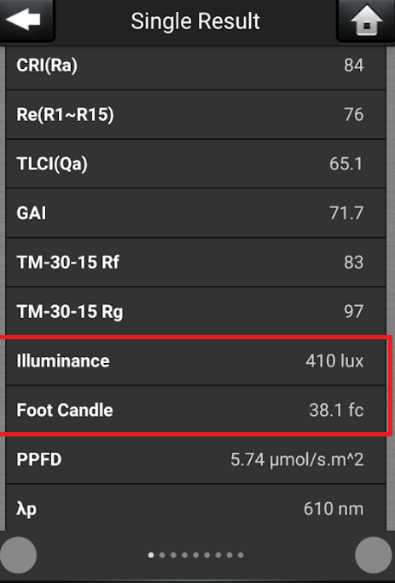 Figure 3: The intensity measured by the spectro-radiometer is calibrated in units of Lux

In figure 4, the quantum representation is used to show the Photo-synthetic Photon Flux Density (PPFD) as a function of wavelength. Spectrum Genius Agricultural Lighting (SGAL) app which is tailormade for agricultural applications shows the following graph. The slider below the graph could be moved and hence ppfd value at each particular wavelength can be found. 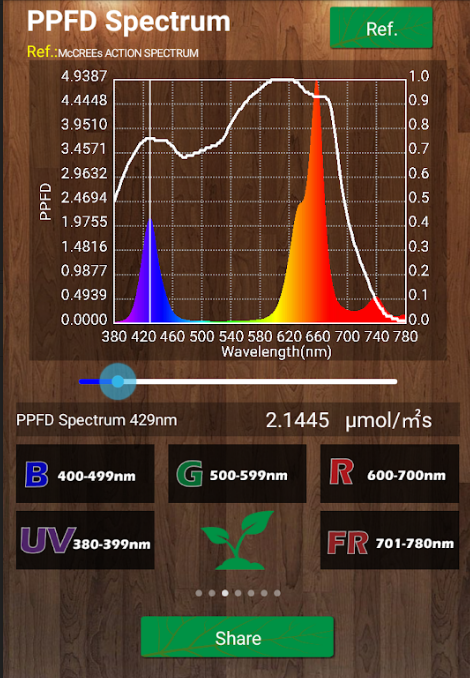 Figure 4: PPFD plot. The slider is measuring the blue peak PPFD in μmol/m2/sec 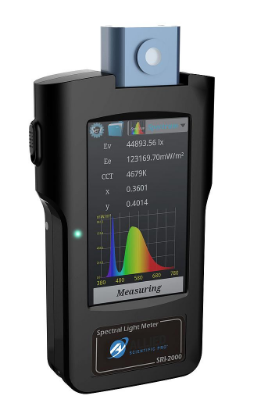 Figure 5: SRI2000 measures the light irradiance (Ee) and illuminance (Ev) in units of mWatt/m2 and Lux

One has to note that the radiometric irradiance units are valid over the entire electromagnetic range but the photometric units are valid only in the range 380-780 nm. Therefore it is meaning less to talk about illuminance and Lux for a 250 nm wavelength for example.

Spectroradiometers are meant to measure the surface reflectance and using the reflectance calculate the absorbance of a material in a range of wavelength. Therefore  a spectrophotometer contains an internal light source which shines on the object and the reflectance is measured. The reference beam R0 is normally measured from a 99% diffuse reflecting spectrolon surface and is recorded in the instrument. By measuring the reflected intensity the reflectance is measured by the ration of r=R/R0. The absorbance is calculated as log(1/r) where r is NOT in percentage. Figure 6 shows a spectrophotometer in the range 900-1700 nm which falls under NIR range and also uses DLP technology. 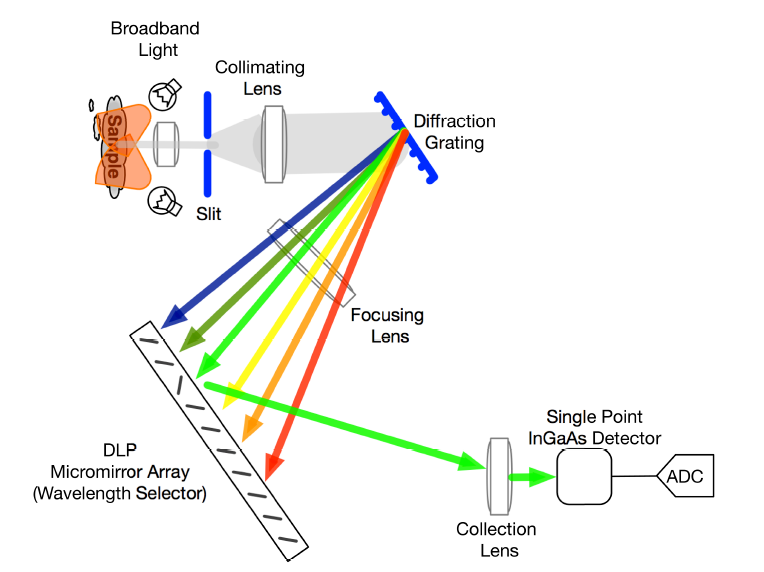 It is also possible to use  a linear array for a spectrophotometer but DLP technology is cheaper and single element detector could be much larger in size than an array element which improves the Signal to Noise Ratio.

Figure 7: Li-Cor light meter can be used as a photometer or radiometer depending on the detector chosen.

Spectrometers, spectro-radiometers and spectro-photometers are  different from simple radiometers and photometers in the sense that they contain a diffraction grating which split the signal at different wavelengths. The DLP technology has helped to reduce the cost of spectrometers in NIR region by eliminating the need for an InGaAS array detector.